If This Ground Could Talk.....

When you travel down any street in the Kansas City area, it’s hard to even imagine that anything existed before development. There are a few nest eggs in KC such as Kelly’s in Westport or the River Market that make you think twice about the nostalgia attached to what used to be. I don’t know many from KC who haven’t walked into Kelly’s with an out-of-towner and said, while clasping their beer in a plastic cup, “This place is one of the oldest in Kansas City…..”

Okay, maybe only people I hang out with do that. :)

A plaque on the side of the darkly painted brick façade of Kelly’s makes your claim legit. Yep, it is historic. Yep, it was built by a relative of Daniel Boone and was a general store. Kansas City is blessed to have this building still standing, especially after the Border Wars and the early destruction of historic Americana in Kansas City.

If you don’t believe me, go to another city just to the east and see what buildings survive. KC is OLD, but it’s only OLD as compared to the West… It’s a baby as compared to American history. What we consider “old” and “historical” is all relative- what is really old is probably buried underneath where you now stand.


Digest that for a minute.

This is important to the story when looking at the bigger picture here. St. Louis was incorporated in 1822; the City of Kansas was incorporated in 1853. Thirty years may seem like a small stamp in time for these pioneers, but at this unique point in history, it was a stretch filled with strife, survival and a heck of a lot of sacrifice. Think of it this way: people that settled in St. Louis were alive during the American Revolution, whereas people involved in Kansas City were on the cusp of the American Civil War. So, so, so much happened between this small stitch in time.

Some records indicate the first log cabin, serving as a tavern, was built in what would become New Santa Fe in 1824. But, the first stomping ground of any major importance was with Westport Landing, incorporated in 1834.


Westport was a weighty operation in the 1830s. It was an entrepreneurial echelon of activity. Establishing Westport was accomplished to aid these pioneers traveling to the West. It, too, sat on the footprints of the Santa Fe Trail. The National Parks Service states that the Santa Fe Trail, a “highway” guiding Mexican and American traders, began around 1821. After the Mexican-American War in 1848, the Santa Fe Trail became a national road connecting the United States to the new southwest territories. The “road” was no longer military; it was adopted by countless pioneer families out to pursue better land and a better life.


The Trail led through Independence and Westport. Some wagons went further south on their travels and bypassed Westport in favor of crossing the Blue River and down the current Holmes Road from Minor Park. In 1851, a farmer with little to no experience in the business industry decided that a border town on one alternate trail route that happened to hug his land only made sense. The travelers were already using his land- why not capitalize on it?

Isn’t this the American Dream??

Dabney Lipscomb was born in 1806 in Madison County, Kentucky. He, along with many Kentuckians during this time period, decided to take a risk many of us would shy upon and move west for more land and more opportunity. In the mid 1840s, Dabney lived and cultivated his rich terrain on the rolling hills of Washington Township, Jackson County, Missouri.


Washington County was known as the “Lost Township,” for according to the records I can find, the land surveyed was lost due to the libations of its surveyor. Legend states the land was surveyed by someone that found whiskey irresistible; thus, after consuming a wee bit too much, his notes on the land were lost. Because of this, the earliest map of this area is 1877, over 35 years after white settlement of the area. This makes finding evidence and examples of what occurred in the area even harder.

I’d love to be able to lecture that guy.


Dabney’s land would be where the current subdivision of Verona Hills is, from approximately Santa Fe Trail on the South, 114th Street to the North, State Line to the West and Wornall to the east. He settled this land, and he would have been one of the first to have used it for cultivation. Prior to this time, the Osage Indians would have freely roamed the landscape.

Records seem to indicate that Dabney’s goal was to establish a town - a center full of materials, expertise and the ability to assist the brave on their trip to the Wild West. New Santa Fe would have been the last official town in the United States – everything sitting on the western horizon belonged to the Native American tribes.


....And you were trespassing.


The Jackson County Historical Society reports that between the years 1847 to 1850, 40,000 western emigrants departed from Westport. Wornall Road between Westport and New Santa Fe is the longest stretch of trail remaining in Jackson County, Mo. today.


What many don’t understand is that there was more than one “trail” in this area to take. In today’s terms, we take shortcuts all the time. Sometimes during rush hour the highway isn’t fastest, so we go the back roads. We do this all the time- what is easiest. This happened in the 1840s and 1850s as well.

Which was the better commute? It depended on whom you asked. Isn’t that true today? Even newspapers published at the time tried to persuade traveleres to take their particular route and avoid the “ruddy” conditions of the road to New Santa Fe. Look at the newspaper article from the Border Star, a super-democratic pro-slavery paper published in Westport Landing (see image to the right).

Regardless, thousands opted for the route through this bustling town in lieu of traveling through Westport, whose roads were reported to be "rocky". The building of the original Red Bridge in late 1859 left little excuse for Westport; the problem had been solved. The wooden structure, painted red, was 100 feet long. No longer did wagon trains have to dredge through the Blue River (I can't help but to have an early Apple computer flashback of the popular 80s game "Oregon Trail"- did you lose an ox in the river? Or a wagon wheel?) The same year Kansas City was incorporated, New Santa Fe opened their first post office. By 1860, even with the Border Wars being prominent (more again on this, too!), New Santa Fe grew to a town of 500 citizens. Imagine that! Choosing to settle on the border between the United States and the Wild West- with skirmishes occurring all around you. At any point, your family could be in danger. These guys must’ve been locked and loaded all the time.


In 1853, Dabney Lipscomb passed away from causes unknown. He, his wife and his son, Nathan, have stones at the cemetery in New Santa Fe. Records state that the stones were moved from their original location (Verona Hills area). In 1854, another risktaker from Estill County, Kentucky barreled into Washington Township with his family and his slaves to settle in Wasington Township. He bought Dabney’s land. His name was Marcus Gill, son of future KC Mayor, Turner Gill.

A blacksmith shop on the corner of Kansas and Missouri nestled the border. Lot 1 was one of the most popular lots in the town. Current lot owners of New Santa Fe, such as Leroy Eddy (Lot 28, D. Lipscomb's Addition), have uncovered horseshoes and nails on his land. Lot 7 and 10 proved to be of historic significance, as a nationwide symbol of a trailblazer, Jim Bridger, opened a business.

The town boasted a blacksmith shop, a stonecutter, a mercantile business, a hotel, a carriage maker, a doctor and a dentist. Men who had helped frame the future of Kansas City first rolled the dice in New Santa Fe.

The very first masonic lodge in Jackson County, Missouri was at J.P. Smith’s shop that was on the border between Missouri and Kansas. The records were burned in the Border Wars around 1856 and the chapter most likely dissolved at this point. I had heard of this masonic connection in my research, and I was humbled when I first saw J.P. Smith’s final resting place at Blue Ridge Cemetery in Grandview. There I was, once again stumbling around in an old cemetery, my eyes skimming each stone for signs. And there it was- J.P. Smith’s grave. With a smirk, I snapped a photo, the masonic symbol clear as day on his stone.


I really geeked out while on a tour of a neighborhood historic farm known as the Watson House. Amidst a pile of artifacts pillaged from the ground, I spied a piece of an ancient plate. It remained undetectable in the soil where it stayed incognito for over 100 years. As I gingerly lifted it up, the symbol stood out from all the artifacts-

New Santa Fe has hidden itself from plain view for many, many years. First it was brutally beaten down on in the Border Wars; then, it suffered when the railroad was built south of the town in what became Martin City; and finally, suburban development engulfed its final pieces and all that remained of the ashes of the town. The only concrete objects which remain are the granite marker placed by the DAR in 1906 and the quiet cemetery fenced in with the swails from the wagons which traveled west nearby.


But there is always evidence to find - and I intend to keep finding it.

Posted by Diane Euston at 7:41 PM No comments:

It’s hard to put into words the objective behind all of this, but I had my reasons… It all started when I was a little girl. To be cl... 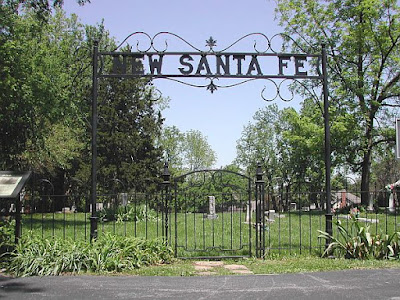 Diane Euston
Diane Euston attended St. Thomas More grade school, Grandview High School and Notre Dame de Sion. She grew up in the area which was originally part of New Santa Fe, a town in Jackson County, Missouri on the Santa Fe Trail. She graduated from Avila University with a B.A. in Communication in 2004. She entered the wine industry and volunteered at her old grade school as a volleyball coach. After working in sales in the wine and liquor business, Diane knew her heart was in education. She returned to school, first earning her Certification in High School English. She began teaching at an inner city charter school. In 2013, she earned her Masters of Education in Teaching and Learning from Avila University. She is a high school teacher in the Kansas City area, teaches a class called Crossroads of America: Survey of Kansas City, writes a History column in the Martin City Telegraph bi-monthly, serves on the Board of Directors for the BMA Foundation, and devotes much of her outside time to historic preservation. She was honored to receive an "Excellence in Historic Preservation" award in October 2017 from the NSDAR. She can be reached at thefamilygenies@gmail.com or through this blog.